For many people, there’s nothing quite as comforting as curling up on the couch on a rainy night. Some find it so relaxing that they even use rain sounds to help lull themselves to sleep. But what do our puppers think about the odd drizzle or downpour? While we know dogs can be terrified by storms, the question still remains: do dogs like rain?

Before we dive into the answer, it’s important to know how wet weather actually affects our furry friends. Aside from leaving them with a classic case of wet dog smell, that is! 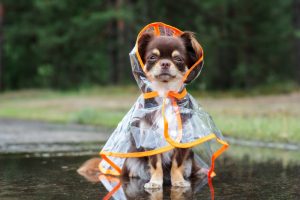 You may be familiar with a condition in humans called seasonal affective disorder (SAD). It’s a type of depression that affects some people during particularly dark, rainy times of the year (typically winter). Even for those who aren’t prone to SAD, the result of long rainy spells is often the same: low energy levels.

Well, it turns out our pups can experience it too. According to a survey by a UK vet charity, 40% of Dog Owners noticed a downturn in their pooch’s mood during winter. Furthermore, 50% said their dogs slept longer, and two in five claimed their pup was less active overall.

Part of the reason your pupper might not want their walk is because their canine senses have picked up on your energy (or lack thereof). Dogs can certainly tell when we’re unenthusiastic about something – like walking in the rain – which in turn makes them less enthusiastic. That said, it’s still important to keep your dog busy on rainy days, so check out our guide, How to Exercise Your Dog Indoors.

Dogs are capable of hearing double the number of frequencies we can, from four times as far away. It’s one of their many superpowers. But when it comes to rain, this superpower is more of a curse than a blessing.

Because their ears are so sensitive, the sound of the rain can be overwhelming for a pup. While the odd drizzle likely won’t have too much of an impact, a heavy rain spell can leave them feeling anxious and restless. For many puppers, this is why the answer to the question of, “do dogs like rain?” is often “no”.

Particularly noisy deluges may leave them pacing, hiding, or shivering – classic signs that they’re looking for a little comfort. If you notice your dog is particularly nervous during downpours, try not to leave them home alone, as this may worsen their anxiety. If you know you’ll be gone for several hours, it’s worth booking an experienced Pet Sitter to keep your furry friend company during the rain.

Like their ears, dogs’ noses are far more powerful than ours. Where your pup’s snoot has a staggering 300 million olfactory receptors, humans have just six million. The part of their brain that analyses smells is also around 40% larger than ours, so they have us well and truly beat.

When it rains, however, their sense of smell only becomes stronger, because moisture amplifies scent. They can even smell the rain in the air before it actually starts pouring!

Interestingly, wet weather is considered one of the best conditions for hunting dogs to track game. This is not only because of their increased sense of smell, but because the moisture in the air carries the scent of nearby animals.

#4. The feeling of being soaked

No one likes getting caught in the rain and feeling soaked to the bones, and dogs are no different. For them, having drenched paws is similar to the feeling we get when our socks and shoes are drenched. After all, dogs have been domesticated for a long time without much frequent contact with water.

Still, some dogs don’t mind it at all. If your pooch is a keen swimmer or loves their regular bath, they’re probably the kind of dog that also likes splashing in rain puddles.

On the other hand, if you find getting them into the tub a major battle, chances are they won’t be happy with getting their paws wet at all. That’s why it’s important to expose dogs to water and rain while they’re young, and to try making it a fun occasion. If you’re lucky enough to have a pool or live by a beach, it’s a good idea to teach them how to swim early on.

Now we know how a drizzle affects them, it’s time to answer the million dollar question: do dogs like rain? The short answer is no. You may meet the odd doggo who loves to zoom around the yard when it sprinkles, but for the most part, dogs don’t like rain.

In addition to the lethargy, noise and discomfort that accompanies rainy days, many dogs have a negative association with rain. It could be that they’ve been scolded before for not wanting to go potty in the rain. Or, it could even be the change in air pressure that comes with those dark clouds. Whatever it is, it’s safe to assume that, unless your dog gleefully runs into the rain at any opportunity, they’re not a fan.

Is rain bad for dogs?

We know that most dogs don’t like rain, but that doesn’t necessarily mean rain is bad for them. The occasional drizzle certainly isn’t going to hurt your pup, and regular exposure to rain can be beneficial. Simply pop a cute raincoat on them and go forth on your daily walk!

However, it’s definitely not a good idea to leave your dog outside for long periods of wet weather. Why? For the same reasons it’s not a good idea for humans to be outside in the rain. While healthy pups will likely be fine, it’s a different story for older dogs and those with weaker immune systems. Muddy puddles especially may harbour dangerous bacteria, which can cause diarrhea and vomiting. It’s always smart to invest in the best pet insurance policy possible to avoid excessive vet bills.