Even though it’s an incredibly common behaviour, yawning is a no less fascinating one. We know pretty well why humans yawn: usually, tiredness, boredom, or simply because we’ve caught someone else doing it. But yawning among animals is a little more mysterious – particularly when it comes to our pooches. Do dogs yawn? If they do, why do they do it? And are they contagious just like human yawns?

If you’ve ever caught your pupper stretching their mouth into what appears to be a yawn and are curious about what it is and what it means, here’s the 411 on dog yawning.

They sure do! Humans aren’t the only animals to yawn – most mammals do, in fact. Primates, cats, dogs, guinea pigs, penguins, horses… they all yawn. And actually, some birds, snakes, and fish yawn, too.

Much like in humans, dog yawns (and indeed yawns seen in other animals) are simply involuntary reflexes where the mouth opens super wide and the lungs take in air.

In animals, it’s widely believed that the body initiates a yawn in an effort to invite more oxygen into the blood and to increase blood flow through the face, neck, and head. Some studies have suggested that it’s the body’s way of cooling down the brain.

The jury is still out as to exactly why we and animals yawn, though. There’s no definitive proof on the body’s rationale for either human or dog yawns – but there are certainly some solid theories. 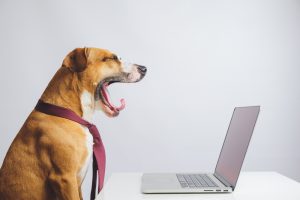 Why do dogs yawn?

OK, so we know that science hasn’t yet gotten to the bottom of human or dog yawning. But below are some good suggestions that might just solve the conundrum of “Why do dogs yawn?”

We thought we’d get the most obvious reason behind dog yawning out of the way. In many cases, dogs yawn simply because they’re exhausted and keen for a sleep.

They might be getting ready to settle in for the night. Or, perhaps they’ve had a big afternoon at the dog park with their favourite local Dog Walker. Whatever the case, you can likely expect your pooch to doze off pretty quickly after a yawn.

Interestingly, excessive yawning is one of the key signs of a stressed dog. If you’re in a situation that could be deemed stressful to your pupper – such as going to the vet, meeting a new person, or being around small children – see if you notice them yawning over and over again. If you do, they could very well be feeling anxious.

When you’re in a situation like this, there are a few things you can do to appease your doggo’s stress. You can try to remove them from the situation to calm them down. If you’re at home, take them to a safe space away from the stressor. And if the behaviour becomes a chronic issue, you can always take your dog to the vet for advice.

Ever noticed your dog yawning when they come up against an aggressive pooch? If so, yawning means they’re showing the other dog that they’re not up for any kind of fight. It’s simply a way for them to diffuse the situation before it goes pear-shaped.

In turn, the aggressive dog may also yawn. This is their way of communicating that they also don’t intend to start something, and can often help to calm the other dog down.

This behaviour isn’t just limited to domesticated dogs, though. Wolves use yawning to communicate similar messages in the wild!

Here’s where things get really intriguing. If you’ve ever been around someone who’s yawning excessively, you’ll know just how hard it is to stop yourself from following suit. But we’re not the only ones who can catch a yawn. Chimps, lions, wolves, budgies, Sprague-Dawley rats, and dogs are the only other species (that we know of) that find them contagious, too.

So, why do dogs (and other species) yawn when they see others doing it? The theory is that it’s a show of empathy. All of the species we just mentioned are sociable creatures, which suggests why they catch yawns and not other animals.

As well, contagious yawning doesn’t just happen between dogs. If a dog sees a human yawn, they might yawn, too. This is especially likely if it’s someone they have a strong bond with.

Should I be concerned if my dog is yawning?

As we know, yawning is a perfectly natural behaviour for dogs. The occasional yawn isn’t anything to worry about, but excessive yawning can be cause for concern.

If you notice your dog yawning repeatedly – especially if it’s combined with other behaviours like pacing, whining, barking, cowering, or a tucked tail – your dog could be feeling stressed. If that’s the case, do what you can to ease their anxiety.

Try to avoid situations that bother your dog. Sometimes, you’re better off leaving them at home if you know they’re not going to have a great time. If you’re already in the situation, remove them as soon as you notice signs of distress. Then, give them a belly rub or lengthy pat to try and calm them down. At home, give them a safe space that’s quiet and filled with their favourite toys, and let them retreat there if they’re ever feeling overwhelmed.

And if it becomes a real problem, you can chat to your vet or engage the services of an animal behaviourist to help them overcome their anxiety. Using specialised training techniques, an expert will help your doggo work through their triggers so they can nip stress (and excessive yawning) in the bud.