Living in Australia comes with plenty of benefits. We’ve got beautiful dog-friendly beaches, an awe-inspiring outback, and an enviably high standard of living, just to name a few. But tell anyone overseas of our sunburnt country’s virtues and you’ll likely get some variation of this response: ‘Yeah, but what about all the snakes and spiders?’ And while we think our pros far outweigh our cons, there’s no denying we share this land with some pretty creepy critters. Sadly, these can include poisonous snakes for dogs.

Although many of us may not encounter a snake in the wild, it’s still essential to know which ones to worry about. This is especially important given we’re a nation of road trip lovers who love to take our dogs camping with us. And since our pups can’t identify a brown snake from a green tree snake, Owners need to know the dangers. So, to help you protect yourself and your four-legged friend, we’re taking a look at the six most poisonous snakes for dogs in Australia. 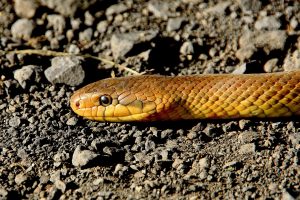 How many poisonous snakes for dogs are found in Australia?

First, a bit of background on the snake situation Down Under. According to the NSW Department of Planning, Industry and Environment, there are around 140 species of land and 32 sea snakes in Australia. Of these, 100 are venomous, though only about 12 can inflict lethal bites on humans. However, because our canine companions are much smaller than us, that number is likely much higher.

An estimated 6,500 Aussie pets are bitten by snakes each year. Unfortunately, the only way to treat a venomous snake bite in dogs is with antivenom, and it needs to be administered as soon as possible. 75% of dogs administered with antivenom survive. Without it, the survival rate for victims is just 31%.

Here are the species for which you need to be on the lookout.

Eastern brown snakes are the second most venomous snake species on Earth. As such, they’re also one of the most poisonous snakes for dogs. These slithery killers vary in colour (from light brown to almost black) and can grow to around two metres in length. They’re incredibly fast movers, very agile, and can fit into even the tightest of spaces. The eastern brown snake can be found throughout all of New South Wales and Victoria; most of Queensland; the South Australian coast; and in some parts of the Northern Territory.

Though generally considered less aggressive and less venomous than their eastern counterparts, western brown snakes inject three times more venom. While they tend to prefer fleeing rather than attacking, they’re still incredibly dangerous. Their habitat is also much larger, and they can be found throughout most of Western Australia, South Australia, the Northern Territory, western Queensland, and northwestern New South Wales.

The highly poisonous mainland tiger snake is commonly found in suburban areas throughout Tasmania, the Brisbane area, southeast New South Wales, most of Victoria, southeast Western Australia, and a small part of South Australia. They’re skilled climbers and can be found at most times of the day and night. They vary greatly in size, colour, and pattern, but typically sport tiger-like stripes. When preparing to attack, you’ll see these snakes raise their heads and flatten their necks.

Though their inland cousin (also known as the fierce snake) is the most venomous snake in the world, unless you live in the outback, you’ll probably never see one. Coastal taipans are found closer to metropolitan areas and, though less venomous, tend to be more aggressive than inland taipans. They can be found along the east coast from around Ballina in New South Wales to the northern tip of Queensland, the coast of the Northern Territory, and the tip of Western Australia. Appearance-wise, they range from light olive to dark brown and measure around two metres in length.

Also dubbed the king brown snake, mulga snakes are incredibly widespread in Australia. They cover all of the Northern Territory, most of Western Australia, South Australia, Queensland, and the northwest part of New South Wales. Their temperament varies depending on their location, with southern mulgas tending to be shier than their northern brothers. Either way, a mulga bite can be devastating as their venom is very toxic and they’re known to hang on to and chew on their victim.

With ‘death’ in its name, it’s no surprise the common death adder is one of the most poisonous snakes for dogs. These lighter-bellied snakes have a banded pattern that can range in colour from red to black. They’re incredibly fast strikers and tend to ambush their victims from under leaves, sand, or gravel. You can find common death adders throughout the eastern halves of New South Wales and Queensland, the South Australian coast, and the southeast coast of Western Australia.

How to protect yourself and your dog from poisonous snakes

Love adventuring with your furry friend? It’s essential to know how to protect both of you from snake bites. Here are our top tips for keeping safe in the great outdoors.