Stumbled across your cat snoozing with their belly on display and wondering what on Earth it means? Or maybe they’re tucked into a ball and you can’t make head nor tail of the situation – literally. Your cat’s sleeping position might seem totally benign and simply a way for them to prove, once again, just how adorable they are. But, there’s actually a lot more to it.

Analysing your cat’s position while they’re in a peaceful slumber can offer great insight into what they’re thinking and feeling. And, as every Cat Owner knows, getting into the mind of a cat is no mean feat.

Here’s what your cat’s sleeping position can tell you. 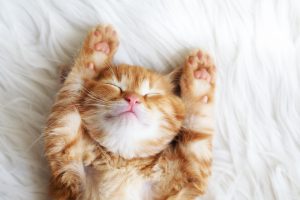 Your cat’s sleeping position and what it means

Cats sleep for anywhere between 50 and 70 per cent of the day. So, it’s no surprise that they’ve mastered a myriad of sleeping positions. Some of them are standard (cat loaf, anyone?), some adorable, and some utterly bizarre. What each one has in common, though, is that there’s usually a deeper meaning.

The cat loaf – also known as the bread loaf or kitty loaf – needs no introduction. It’s possibly the most famous of all cat sleeping positions. Your cat is “loafing” when they tuck their paws and tail beneath them, making them resemble a loaf of bread.

Your cat folds their paws and tails under their body so they can keep their extremities warm. A loafing cat also signifies a relaxed cat. Because they’ve neatly swaddled their paws, it means they’re not preparing to quickly bolt or defend themselves from a threat. Your cat is likely to loaf in their favourite spots around the house where they feel most comfortable.

The croissant comes in a few different forms. You might find your cat forming a half croissant, where they’re kind of loafing on their side. Or, they may be in a full croissant. This is when they’ve curved their body so much that their face is resting next to their hind feet.

Generally, if your cat is in the shape of a croissant, they’re trying to keep their vital organs warm. Cats can also get particularly cold around their nose. If you spot them lying with their head upside down, they’re trying to get their nose closer to the warmth of their body.

The next stage of the croissant evolution, the snail is a tighter, curlier, and cuter version. If your cat is doing the snail, you’ll see them curled up into a compact ball with their head tucked under their body. In some cases, they may also shield their eyes with a paw. The result is a nondescript ball of fur that’s as adorable as it sounds.

Cats do this to protect the more sensitive parts of their body, to shield their eyes from the light, and to keep warm. Also think of this position as their very own ‘Do Not Disturb’ sign. A curled up cat probably doesn’t want to be bothered.

Position #3: The back sleeper

If you catch your cat sleeping on their back with their tummy exposed, it means they’re super relaxed. Much like dogs, the stomach is a vulnerable area for cats. By exposing it, they’re revealing just how comfortable they are.

If your trusted Pet Sitter mentions that your cat slept on their back while you’re away, that’s a great sign. It means your kitty feels incredibly happy and secure in your Pet Sitter’s company!

Here’s a helpful hint: unlike dogs, not all cats enjoy belly rubs. Just because your cat is exposing their tummy, it doesn’t necessarily mean they’re asking you to stroke it. Doing so can make your cat feel uneasy or threatened, and they may respond by attacking your hand.

Position #4: The side sleeper

This sleeping position is pretty self explanatory, but perhaps its meaning is a little less obvious. Similar to sleeping on their back, a cat on their side is exposing some of their tummy. This means your cat is feeling pretty darn comfortable. You’ll usually see a side sleeper with their legs outstretched, too, which further proves just how safe they feel.

Position #5: The half sleeper

Ever seen your cat in the grey area between wide awake and fast asleep? It looks a bit like your cat is doing a slow blink or sleeping with their eyes half open. Cats do this so they can keep watch for incoming threats. Sure, at home they’re unlikely to encounter a wild predator, but cats retain many of their primitive instincts.

While they’re in this state, cats aren’t really going for a deep sleep. Consider this more of a cat nap, if you will.

Some cats can’t get enough of you, your lap, or each other. Social sleepers love the warmth and comfort of sleeping near their favourite human. So, if your cat is sleeping on or up against you, take it as a big compliment. They likely feel very safe in your company and are happy to let their guard down.

If your kitty is sleeping with or near other cats in your home, it’s a sign they’ve formed a tight bond. Cute!

We don’t know about you, but the thought of sleeping upright isn’t particularly appealing. Not so for cats! Some are quite happy to sleep sitting up from time to time.

Much like a half sleeper, an upright sleeper is probably only having a light nap. Their vertical position allows them to quickly spring to attention should any threats enter their orbit.

Is your cat snoozing in a manner that sits entirely out of the realm of normal sleeping positions? Maybe they’ve twisted their body in a way you never thought possible. Or, perhaps they’re splaying out their legs in four different directions.

While your cat is likely to be very relaxed in this position, there’s not much else to say about a contortionist kitty. Except that it’s a very adorable – and often hilarious – way to catch them sleeping.

Can my cat’s sleeping position determine whether they’re sick?

A sleeping position alone is unlikely to indicate whether your cat is sick, but there can be other warning signs. Sick cats might get into a hunched position if they’re in pain. Alternatively, they may struggle to sleep in a normal position. Sick cats also generally sleep more, and many will sleep in a hidden spot so they can get some privacy.

If you see this along with other signs of cat illness – like decreased energy, breathing troubles, or lack of appetite, among others – it’s best to take your cat to the vet for a check-up. If you’ve got pet coverage, any tests and checks will be covered. By quickly getting on top of a potential problem, you can relax knowing your kitty will get back to one of their favourite sleeping positions in no time!